Bramdean Common was, in the Domesday Book, land provided to Miles for the service of the porter of Winchester Gaol. In 1199 the owner of Bramdean, Henry de Bramdean lodged a claim for the ownership of the land, but due to some distractive money problems, was unable to perform his duties adequately. King Richard, as a matter of necessity, decided to refer the service to the hands of a more local man. In doing so, took land away from Bramdean Manor and created Woodcote manor.

Over the years the Bramdean Manor list more of its lands and rights until the manor was sold to Selbourne before finally being annexed to Magdalen College Oxford, who hold some manorial rights over the common. Woodcote, and the gaoler service has passed hands throughout history, largely due to the ineptitude of its incumbent porter.

The common has been more recently used as a charcoal coppice site and a site for gypsies who built the iron tabernacle on the common (1883). According to the 1st OS map ~19th century, the common appeared to have been cleared, or at least managed. Other maps show periodic cover of some description, 1872 1894 maps (old-maps.com) all show coppice like symbols. A 1950 aerial shot shows extensive cover, probably due to neglect of the coppice industry. This neglect is the main habitat type today.

It is a mosaic of beech, hazel, and oak coppice with some larger stands towards the site of the church. Occasional Conifers can be seen throughout the common, as can a larger amount of un-thinned re-growth. There is little light to the ground flora and most of the rides are shaded. The woodland on the southern field boundary to the north is not part of the common and looks to have been lost to arable sometime after 1950.

The estimated age of the trees are consistent with the history of the site. 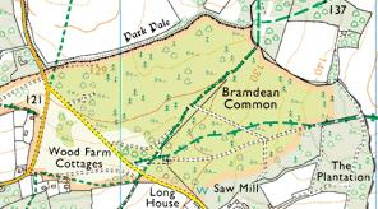 Only one oak showed an estimate of being significantly older than its surroundings, @ 682 years old (no 8). As this was a multi-stemmed, non-coppice stand the girth may overestimate the age. However, the lack of adjacent trees of similar age may indicate that this may have been left by the coppicers if it was already established (150 years) or had any sentimental value. Therefore, whilst the age may have been over estimated due to the 2 trunks, it may be at least 150 years older than the next oldest oak found (413).

The last coppice cycle age towards the north end was estimated by measuring the best available Beech coppice stand (211 years) (number 7) and then comparing it to a Maiden Beech Stand a few yards to the west (age 139). Given the Maiden’s proximity to surrounding coppice and the old road on which it stands, a figure of 139 years is an indication for the last time the area was extensively managed as woodland coppice (1868). This is consistent with the age of the tabernacle (1883) and also suggests that the old northern road was still in use.

Anecdotal evidence from the Parish website, indicates that the coppice industry was still in operation 70 years ago (1940). Post war photography suggests that the industry stopped and that the northern area was removed for arable up to the old road. This is consistent with the relatively thinner girth of the coppice trunks and age of surrounding woodland. Combined, this would also suggest that coppice was in decline at the turn of the 20th century, supported by the loss of cricket ground (mapped in 1872 but no later (1896 no indication)), an extensive woodland cover in 1950, which indicating rural flight to cities and wartime upheaval.

Most veteran trees were located towards the tabernacle and crossroads. Some of the rides showed earth works, some with growth in between. This would indicate that the older roads pre-date the planting. A beech (226 years) and oak (415) (numbers 4 and 5) were found on the earthworks with another considerably smaller one found in the middle of the old road, giving an indication to the last use. This may have been a result of poor drainage, which the site currently shows around the church. No other veteran trees were found along the lines of the earth works.

It would seem that the commoners left the area around the church relatively wooded, and a solitary oak in the middle of the common, but coppiced the remainder, moving rides from older established ones around the church. Possibly due to drainage or to access problems.

The dating of the last coppice (very rough!), the map and photo evidence would suggest that the coppice industry and the parish economy began to decline at the turn of the 20 century, constituting the current dominant habitat type.